(in collaboration with architect Spiros Flevaris) 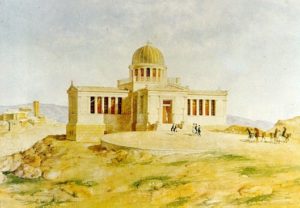 As soon as Greece was declared an independent nation-state and became a monarchy ruled by King Othon (1833-1862), several educated Europeans settled in the new capital aiming to modernize it. Othon himself, enthused by the idea of reviving the spirit of classical antiquity in Athens, commissioned a number of European architects, mainly Germans, Danish, and Greeks who had studied in Germany, to design the new capital around the ancient city’s most significant monuments. The architect Theophil Hansen was among them and the National Observatory was one of the first commissioned projects that stood at the crossroads of modern science and political power.During this period Athens had the potential of becoming the Metropolis for both the Greek Diaspora—who had risen to prominence, particularly in Europe—and the Greeks that were still under the rule of the Ottoman Empire. While the city was indeed transformed from a small village into a European-like metropolis, the observatory symbolized the orientation of the new state towards the classical past. This orientation was the result of a network of powers defined by the Bavarians who administered the newly independent country; the King’s visions of modernity; the political and social expectations of those Greeks who had been educated in Vienna and made a fortune trading goods from east to west; the resentment of the Greeks for the monarchy that was forced upon the country – which was to remain without a constitution until 1843. At the intersection of urban history, architectural studies, and history of science, our project has the ambition to raise interest in the history of modern Greek science, among the least studied modern scientific culture, and to historicize the notion of metropolis, keeping in mind that the binaries it implies are always constructed by our own narratives.

Getting the radiation dose correct is of strategic importance for a number of interrelated actors: the manufacturers of radiation equipment and of the specialized computer software that these machines require; the physicists, radiobiologists, specialists in nuclear medicine and experts in dosimetry in the laboratory; the medical physicists, dosimetrists, radiation oncologists, technicians, and health care workers in the medical clinic; and of course, the cancer patients themselves. What is at stake after all is human health. Despite the highly sophisticated medical technologies used in radiation therapy, cancer patients throughout the world continue to receive the wrong radiation doses during their personalized treatments.  Focusing on the International Atomic Energy Agency, the project examines how pertinent historical, epistemological, sociotechnical, and diplomatic issues have historically affected the design of quality assurance and dosimetry practices. 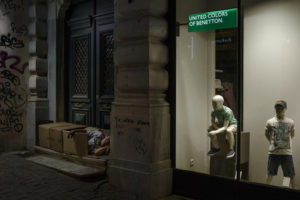 I have a strange interest in all boxes. I used to collect tin and paper boxes, most of the time empty ones just because I enjoyed their outside graphics. Bizarre habit. A close friend of mine was brave enough to suggest that I should look for an explanation to the Freudian theory. In his general introduction to psychoanalysis, Freud discusses the symbolic interpretations of dream elements. The great majority of symbols in the dream, as he argued, are sex symbols. Boxes find their prominent place there. “The female genital is symbolically represented by all those objects which share its peculiarity of enclosing a space capable of being filled by something—viz., by pits, caves, and hollows, by pitchers and bottles, by boxes and trunks, jars, cases, pockets, etc.” I was not sure what to make out of it and thus pushed it under the carpet for a long time; until boxes started appearing in my scientific work and, more aggressively, in my daily life. Let me start with the second. After Greece’s first bailout in 2010, unemployment was rocketed from 9.5% in 2009 to 17.7% in 2011 and finally to 25,2 % in 2015. A massive wave of layoffs that started right after 2009, led many to unemployment and soon to homelessness. And as we know urban homelessness has a particular aesthetic: the cardboard box. Ironically, while the cardboard box has been always a symbol of economic success, commercialization, and industrialization, it now signals the increased numbers and visibility of homeless persons in Greek urban areas. My friend’s suggestion starts to make sense. The house of the homeless—the rumbly, crumbed cardboard box—upsets my sense of security by being enclosed in a motherly womb, cracks my trust to order, reveals the fragility of my social world, the fluidity of our borders…

excerpt from Rentetzi, Maria. “Cardboard Box: The Politics of Materiality”